Memory for the Sake of Future

«Memory for the Sake of Future» 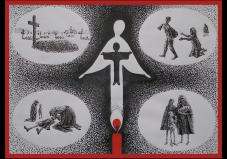 An art exhibition “Memory for the Sake of Future…” was represented in the Memory Hall of the National Museum “The Memorial in Commemoration of Famines’ Victims in Ukraine” on the 19th of September.

The Memorial in Commemoration of Famines’ Victims is a unique monument which was founded to commemorate millions people who were starved to death at the beginning of the 20th century in Ukraine. At the same time the Memorial is a sign of indestructibility of the Ukrainian nation and recollection for the future generation which states that neither liberty nor desire to be free can be killed in a physical way. 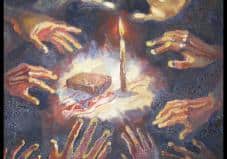 The National Museum “The Memorial in Commemoration of Famines’ Victims in Ukraine” being a place of accumulation the experience of the past for the projection of the future initiates an art exhibition “Memory for the Sake of Future”. The exhibition combines artistic works from the series “Daggled Bells of Memory” by Valery Franchuk, Honored artist of Ukraine, winner of the National Prize of Ukraine named by Taras Shevchenko and works by younger generation of artists who presented their own vision of Holodomor tragedy using different artistic tools. Combination of highly professional works and amateurs’ ones demonstrates the unity of generations, thus, the theme of famine is regarded not so tragic. Artistic works presented at the exhibition have an implicit meaning. Suffering means not only death and oblivion but the hope of resurrection and remembrance. Likewise tear is not only a sign of sorrow and loss but also means spiritual purification.

Exhibition “Memory for the Sake of Future…” demonstrates the revival of national memory of Ukraine and it also serves as a warning against forgetfulness and oblivion. Such an interpretation of the tragic pages of Ukrainian history gives hope for spiritual purification of the nation and encourages each its member for action and development.

The exhibition presents paintings by Valery Franchuk from the series “Daggled Bells of Memory”, masters of paper cutting – Maryna Vashchenko and her students and works by children of different ages and from different regions of Ukraine.