“Let’s Remember Them… They lived in Famines’ Years” 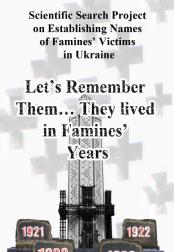 National Museum “The Memorial in Commemoration of Famines’ Victims in Ukraine” is the centre of commemorating innocent people who were murdered by famine in the first half of the 20th century. Today the Museum works on broadening its activity and gradually becomes the centre for scientific research as well.

Constant search and research works on famine accumulated unique material that contains unbiased information about the events of those times and testimonies of famines’ victims in Ukraine and abroad. Thus it appeared an urgent need to concentrate all the information of the famines’ victims of 1921-1922, 1932-1933 and 1946-1947 years in Ukraine in one place, namely to create a complete and systematic registry of victims of three famines.

Due to the fact that the majority of documents registering people’s births and deaths were destroyed during the Great Patriotic War and by order of the state security organs, the exact number of the famine’s victims in Ukraine is almost impossible to establish. Calculating of different researchers has also no consensus on the number of deaths during the famine in the early twentieth century in Ukraine. According to the Institute of Demography and Social Investigations named after. MV Ptukha famine killed more than 1 million people in Ukraine in the years of 1921-1922; the Soviet statistics determines 800 000 deceased, other researchers say about 1.5 million victims. 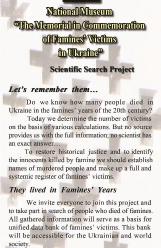 Soviet historians completely denied the fact of famine in 1932-1933, that was also the reason why the number of deaths was difficult to calculate. Thus, population losses caused by Holodomor 1932-1933 in Ukraine are 3 million 941 thousand persons (estimated by the Institute of Demography and Social Investigations named after Ptukha), other researchers indicate that the number of victims was from 5 to 7 million people. Thereby, the number of deaths during the famine of 1932-1933 equals the loss of Ukraine during the Great Patriotic War and the loss of the Jewish nation during the Holocaust.

Thus, during incomplete three years Ukraine lost at least 5.5 million people. This is a tragedy of global scale, which was ignored in the Soviet times. To stop discussion as to the number of those who were killed by famine and to indentify the innocent victims of famines in Ukraine the Museums launches Global search project “Let’s remember them… They lived in famines’ years” and invites everyone to join this project